There are many ways to do things wrong.  A couple of weeks ago I woke up with my left hand seriously swollen.  It was a reasonably good reproduction of the hand of the Stay-Puft Marshmallow Boy.  I headed to the Urgent Care Center to have it looked at.  The first thing out of the nurse’s mouth was, “We’re going to have to cut off your wedding ring.  If it cuts off the circulation anymore, you could lose your finger.”

Cutting off my wedding ring had not been part of the plan.  Although it was very tight, my ring finger didn’t hurt, and I just assumed the doctor would give me something to get rid of the swelling, my hand would return to its normal size, and I’d go my merry way.  Besides, having been married some thirty-two years, I’d guess that easily around twenty years had gone by since I’d even been able to get the ring off.

The decision actually was pretty easy to make.  Gold rings can be repaired and dead fingers can’t.  Within minutes, the nurse and her CNA were sawing away at my ring with a special device designed to cut the metal and not my finger.

Once the ring was sliced through, then came the hard part. Pulling the ring over my hyper-sized fleshy knuckle proved to be the painful part of the process.  As they say, see illustration below: 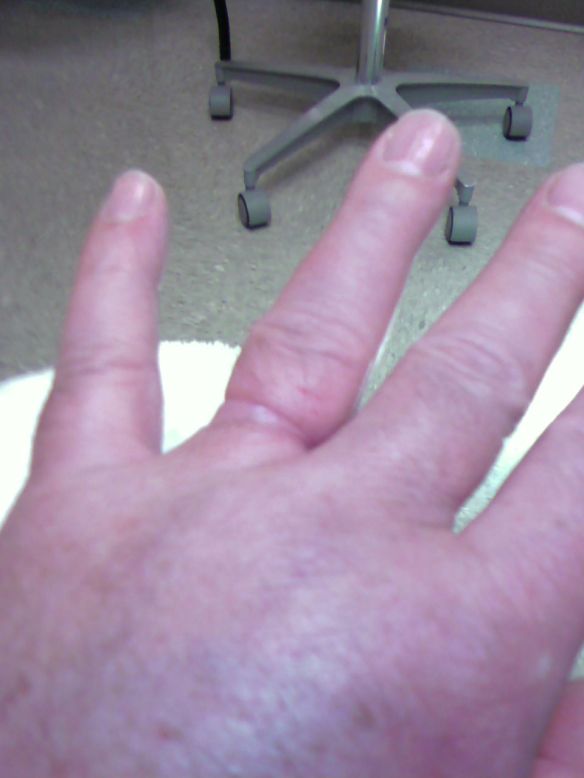 Within a few hours, my hand returned to its normal size and I retain a healthy ring finger.  My wedding ring can be repaired, as well.

But as I said in my lede, there are wrong ways to do things.  That happened today in the Senate Finance Committee when two different amendments for a public health plan, supported strongly by at least 65% of Americans according to recent national NYT/CBS poll, were defeated by a combination of Republicans (who have spent zillions of dollars as well as bazillions of hours trying to either wound to kill health care reform) and a group of Democrats (who, in the Senate, are referred to I think as Donkey Blue Dung Beetles).

Here’s my analogy.  The public option is the “ring finger” in the health care reform hand.  It is essential since people hands have had five fingers for a long time.  The ring finger, however, has become controlled by Big Medicine, and they have come up with this outrageous lie that their ring is soooooooo important and big, that the public plan ring finger should be amputated.  See illustration below:

Yep, save the ring; amputate the finger.  We won’t be able to  wear it on the hand, so we’ll just have to wear it like a crown, to remind us daily that Big Medicine is King/Queen of American Health Care.

Thanks, Max.  You’re doin’ a heckava job there making sure the American health care disaster is complete success.  Heckava job.