America’s Health Insurance Plans pushed the button on their “nuclear option” bomb to blast health care reform into oblivion.  The safety was released, the countdown went to zero, and “click!”

This is what AHIP and Big Medicine wanted to hear: 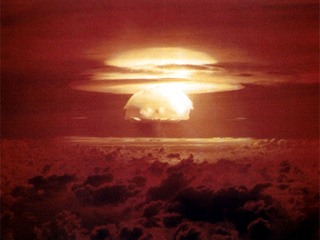 Instead they heard this, from the President of the United States:

In fact, the insurance industry is rolling out the big guns and breaking open their massive war chest – to marshal their forces for one last fight to save the status quo. They’re filling the airwaves with deceptive and dishonest ads. They’re flooding Capitol Hill with lobbyists and campaign contributions. And they’re funding studies designed to mislead the American people.

It’s smoke and mirrors. It’s bogus. And it’s all too familiar. Every time we get close to passing reform, the insurance companies produce these phony studies as a prescription and say, “Take one of these, and call us in a decade.” Well, not this time. The fact is, the insurance industry is making this last-ditch effort to stop reform even as costs continue to rise and our health care dollars continue to be poured into their profits, bonuses, and administrative costs that do nothing to make us healthy – that often actually go toward figuring out how to avoid covering people. And they’re earning these profits and bonuses while enjoying a privileged exception from our anti-trust laws, a matter that Congress is rightfully reviewing.

Don’t think for one second that AHIP has conceded or surrendered.  As the bills move through the process of being reconciled, the intensity of the pressure on Congress and YOU and ME, will intensify into a political nuclear storm, the likes of which we have never seen.  The days before the final votes in the Senate and the House will be filled with a Big Medicine-financed noise that would turn an Orc to stone.

President Obama, however, did not stop there:

Last November, the American people went to the polls in historic numbers and demanded change. They wanted a change in our policies; but they also sought a change in our politics: a politics that too often has fallen prey to the lobbyists and the special interests; that has fostered division and sustained the status quo. Passing health insurance reform is a great test of this proposition. Yes, it will make a profound and positive difference in the lives of the American people. But it also now represents something more: whether or not we as a nation are capable of tackling our toughest challenges, if we can serve the national interest despite the unrelenting efforts of the special interests; if we can still do big things in America.

Now is the time for health care to be added to those moments of sublime national change, to join those great reforms, cast as the finest, hardest steel into our Nation of Laws as an inalienable right and an eternal Blessing of Liberty.