He is risen, indeed!

Light of the World

On the night of His birth He was hailed as the Prince of Peace, the heir to David’s royal throne

Thirty-three years later He was executed on a wooden cross

On the night of His birth He was born in a stable, most likely a cave, open to the cold night air, attended by gentle farm animals

Thirty-three years later He was buried in a tomb, most likely a cave, covered by a massive stone, attended by armed guards

On the night of His birth a new star appeared in the heavens, splitting the darkness, and the heavenly host rejoiced that Emmanuel, “God With Us” had come into the world

Thirty-three years and three days later, He arose, a New Light, and appeared to the world, banishing the darkness of sin and all humanity rejoiced that Jesus, the “Light of the World” is the Risen Lord whose light shines forevermore.

[Each day of Holy Week, I am going to publish a communion meditation that I wrote and delivered, while serving as an Elder, over the past seven years where I worship at Northwood Christian Church, in Springfield, Oregon.]

This week we will commemorate the terrible events of September 11th one year ago.  I would like to offer a perspective on what it means to be a Christian and to come to this table as we remember those who perished, those who were left behind, and those who gave so much to rescue and protect the survivors.

My illustration comes not from Ground Zero in New York, but from a newscast in the Palestinian city of Jenin after the Israeli troops occupying it earlier this summer had left.  The reporter was interviewing a group of Palestinians standing on the rubble of what was once their homes.  What caught my attention, however, was the hand-lettered banner tacked onto a wall, written in English, undoubtedly for the benefit of the American and British TV cameras.

“We will never forget.

We will never forgive.”

The words stunned me.  It is one thing to never forget.  Our brains are designed to remember things, after all (finding the TV remote notwithstanding).  To choose not to forgive, however, is another thing altogether.  To make that choice is a decision that will only lead to vengeance and violence, to accept whatever Evil places before you, to justify any act with any means.  There is no justice, only the burning for revenge.

And that is exactly the opposite-the opposite-of what coming to this table stands for.  We come not because we deserve to be here; we come because, above all, we are the forgiven, invited to join our host, the One who gave His life for our sins.  Each week as we gather to take communion, we gather around this table of forgiveness.

Jesus said, “This, do in remembrance of me.”  That is our banner so we will never forget his sacrifice.  But also, as our Lord forgave those who executed him upon a Roman cross, we are also to always remember His example to forgive those who persecute us.  When we make the decision to forgive, we open our lives to God’s justice, to defend and protect those who are oppressed and downtrodden.  In this, our hearts burn not for revenge but for peace.

This is the table of remembrance and forgiveness.  It has been given to us to remember that first, we are the forgiven. 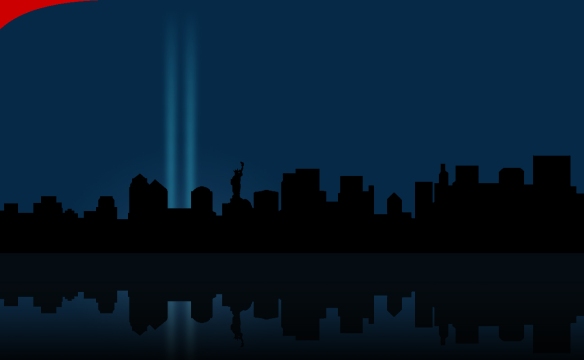 [Each day of Holy Week, I am going to publish a communion meditation that I wrote and delivered, while serving as an Elder, over the past seven years where I worship at Northwood Christian Church, in Springfield, Oregon.]

Echoes from the Future

We all enjoy standing on the edge of a canyon or the balcony of a building and calling out loudly to make our voice echo.  It’s fun to hear the sound bouncing around like we were standing in several spots at once.  And we use the term echo as an analogy for remembering events that have happened in the distant past.

But when God speaks, the echoes can come from the future.  Consider these words of the prophet Isaiah, written over five hundred years before the birth of Jesus:  “Surely he took up our infirmities and carried our sorrows, yet we considered him stricken by God, smitten by him and afflicted.  But he was pierced for our transgressions, he was crushed for our iniquities; the punishment that brought us peace was upon him, and by his wounds we are healed.  We all, like sheep, have gone astray, each of us has turned to his own way; and the Lord has laid on him the iniquity of us all” (53:4-6, NIV).

These words are not echoes of the past, not when Isaiah wrote them, and neither for us, for they are the present word from God to all future generations of humankind.  The words tell us what happens and why it has to happen, so at that moment in time, in reality, in history that Jesus sits at the table with his disciples, a new present and a new future is opened.

We come to this communion table each week not merely to remember Jesus’ death on the cross, but to celebrate His presence with us.  The bread representing his body broken for us and the juice representing his blood shed for us binds us to the past, present and future of God’s eternal love and salvation.  Again to quote one of Isaiah’s echoes from the future:

Therefore I will give him a portion among the great, and he will divide the spoils with the strong, because he poured out his life unto death, and was numbered with the transgressors.  For he bore the sin of many, and made intercession for the transgressors (53:12, NIV).

And most of all, because He bore my sin.