On my DISCI Blogsite, I wrote two posts

regarding the latest thinking about

the Star of Bethlehem from an

astronomy point of view.  Was it real

or did Matthew in his gospel include the story of

the Magi for dramatic effect?

You may be surprised at the new theories

advanced by astronomers that point to the

distinct possibility the Star was an observed event!

For a historically-based look at a beloved

Okay, let’s start with the obvious.  The sun, the moon, planets and stars rise in the east and set in the west.  We all know this; everybody knows this.  Even before Copernicus, Kepler and Galileo (in the 1500s and early 1600s) figured out the motion was due to the rotation of the earth and not of a cosmic celestial bowl turning over a stationary earth, the day and night cycle was something everybody just knew because that’s what everyone observed, day after day.  And aside from the occasional comet or meteor shower, everything in the sky rose in the east and set in the west.  “Sicut erat in principio, et nunc et semper, et in secula seculorum. Amen.  Alleuluia.”

What few astronomical references we have from the Bible, it’s always rise in the east and set in the west.  The passage in Joshua 10:12-15 doesn’t contradict this.  According to the text, Joshua asks the Lord to stop the motion of the sun and the moon “in the middle of the day” (v. 13a), and “[the sun] did not hasten to go down for about a whole day” (v. 13b).  Some day, huh.

Neither does the curious passage in Isaiah 38, in which the Lord directs Isaiah to tell the dying Hezekiah that the sign of his healing will be, “‘I will cause the shadow on the stairway, which has gone down with the sun on the stairway of Ahaz, to back ten steps.’  So the sun’s shadow went back ten steps on the stairway on which it had gone down” (Is 38:8).  Isaiah then heals the king’s near-fatal boil by applying to it a “cake of figs” (v 21).  That’s the NASB’s translation.  The NIV says a “poultice of figs,” but to my way of thinking the whole idea of a poultice has a much higher “yuck” factor even if it is more literal.  Of course, why they just didn’t do the whole fig-cake thing to begin with, we’ll never know.  Anyway, modern Astronomy doesn’t have an answer to either of these accounts, but it doesn’t matter.  The Israelites won the battle over the Amorites, and Hezekiah got a 15-year lease on life, so don’t knock it.

All right, where is this going?  I do have a plan.

Fast forward to the Nativity narrative in Matthew, with the Magi.  When Magi AstroConsulting ™ show up at Herod’s court in Jerusalem, they said they had seen this new star in the east, that according to their Cray Supercomputers, er, magination and divinations had determined it signified a new King of the Jews.  Aside from the fact this rather impolitic announcement spread like wildfire in all the local papyrus tabloids and cable TV talking heads, their announcement, was astronomically correct.

These astronomer/astrologers were east-centric.  From our modern perspective, space is a big, big place and the whole notion of the cardinal points of north, south, east and west, are not of much significance in a universe that stretches infinitely away on all vectors from our small blue dot. That’s for us landlubbers, anyway.  Navigation by air or sea requires the correct heading or bad things will happen.

But the guys at Magi AstroConsulting ™ lived in a much cozier universe, and predicting accurately what stuff in the sky came into view, when, and in what order made all the difference (not to mention keeping their heads connected to their necks).  Therefore, prior to the Copernican Revolution, the most important direction was EAST.  Besides with artificial lighting to accompany us at all times, we in modern culture rarely look up anyway.  What’s the point?  I’LL TELL YOU WHAT THE POINT IS…oh, sorry, I don’t want to cry and get my computer keyboard wet.

So the Magi see this star rise in the east and watch its track to where it sets in the west.  Although they couldn’t compute longitude (the vertical grid circling the globe), they could compute latitude (the horizontal lines), and throwing in a little astrology to plot which constellation signifies an auspicious event in the land of the Jews, they packed up their dromedarian SUVs and headed west.  ROAD TRIP!  The Route 66 of the Ancient World!  Destination Jerusalem!  On the way back, they’d hit Caesarea Phillipi, hang out on the beach, catch a few shows.  Some things never change.

The plot thickens, of course, because in present day, every off the shelf astronomy computer software program can calculate the night sky between 10,000 B.C. and A.D. 10,000 (10,000 C.E if you want to archeologically correct), and there were some very interesting things happening in the sky between 6 B.C. and A.D. 6., but we’ll deal with that story nearer Christmas.

And as for the star guiding the Magi caravan to the house in Bethlehem?  Well, there’s west (recall they were going west) and then there’s west.  Remember, the sun sets truly in the west only twice a year: at the Spring and Fall Equinoxes.  As soon as one deviates from true south or north in a westward direction, then one is “going” west.  That’s about a 180-degree variation of “westerly.”  So, despite the fact Bethlehem is slightly southwest of Jerusalem, it’s no big stretch to get everything to line up.  Of course, the Matthew narrative is much more satisfying, so since they found the right place, don’t knock it.

Double fast-forward to modern day.  I’m standing in my driveway looking west for the newest star in the heavens to appear.  Yes, west.  Didn’t seem right, with all I have just written, but west it was.  And it wasn’t really a star.  It was the International Space Station.  The fourth brightest object in the sky, and as well, only the fourth object in the sky to be visible in daylight (not counting the rare supernova or bollide meteorite).  Why west to east?  That’s the direction of the rotation of the earth.  It’s the rotation of the Jet Stream.  Spacecraft generally are launched with the earth’s spin.  Takes less fuel.  Launch to orbit in eight minutes.

So, there I was.  8:23 p.m. Pacific Daylight Time.  Out of the glow of the setting sun a golden star, the brightest object in the sky, soars overhead.  Fast!  Very fast!  About two and a half minutes from horizon to horizon.  I was stunned!  About it’s size.  Of it’s brilliance.  And of the implication that every few nights, when the clouds of the great Cascade rain forest part for even a few moments that I will be able to step outside and watch this golden orb slide overhead.

A naked eye object.  A real spaceship. A human presence in space.  Not science fiction.  Real.  Just step out of your home every few nights and look up.  You can check the schedule for your Zip Code by going to http://www.spaceweather.com and clicking on the “Satellite Flybys.”

And I imagined what the Magi might have thought if such a thing, this golden star had soared over their heads, west to east.  Going the wrong direction.  To follow that star, they’d need rocket-powered camels! 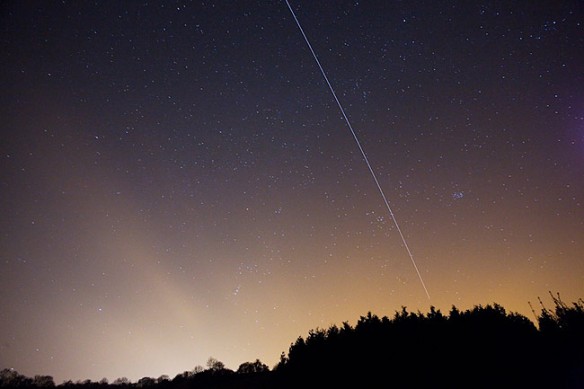