I just finished watching clips from NBC’s Meet the Press, which featured Sen. Charles Schumer (D-NY) and Sen. Orrin Hatch (R-UT) discussing the status of the “public option” in the health care reform debate. It wasn’t much of a debate, despite host David Gregory’s best effort to provoke something other than party-line blather from either senator.  He wasn’t having much success.

But then, seemingly out of nowhere, Sen. Schumer made a comment that snapped my attention to full alert. He compared the public plan competing against private health insurers with public and private colleges and universities.  (If you watch the clip, it comes right at 2:00 minutes.)  I had to back it up and watch it again to confirm I actually had heard him correctly.  Gregory didn’t catch it, which he should have; Sen. Hatch, if he caught the comment, either had no response, or was so close to dozing off, he just kept mumbling the same old script.  I couldn’t really tell.

Schumer’s statement was a new characterization; I hadn’t heard it before. I’m not sure he even recognized the significance of it.  But it is an intriguing way to look at the public option. And since my PhD is in Higher Education, this is something I actually know something about.

Every state in the country has private and public universities.  Take Texas, for example, where the idea of the public option is more anathema than the Long Horns losing to Oklahoma.  The University of Texas in Austin is a public university.  Texas Christian University (TCU) in Ft Worth, where I earned my Master of Divinity degree, is a private university. 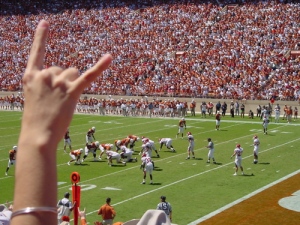 According to the prevailing dogma of Republican and Free Market devotees, the government should never be allowed to compete against free enterprise and the private market, because the government will always do it worse, waste vast amounts of money in the process and destroy competition, thereby threatening the American Way of Life.

Does the public university “system” in the country drive out the private schools by being too competitive for them to survive? They could in theory, because student tuition in the state schools is subsidized by taxpayer dollars (although that has been shrinking dramatically over the past twenty years–the states all too often are short on cash), attracting more students than the private schools. For example, UT is a lot bigger than TCU (50,000 vs 9,000!). But private colleges, which were the original American academic institutions (Harvard was founded in 1636), continue to compete and flourish, despite the apparent advantage the public schools have. The typical model for what we think of as a state college or university did not come into being until after 1862 with the passage of The Morrill Act. 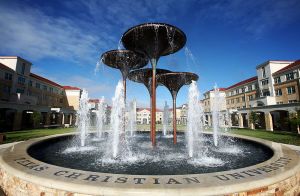 There are a lot of reasons, but the one relevant to our discussion about health care is that federal financial aid creates portability and allows students to choose (in concept) to attend any school in the country. I have two degrees from private schools and two degrees from a public school. Why did I choose those schools? Because in each instance it offered the academic program I wanted to pursue. Federally funded financial aid guaranteed that I had a choice. That is higher education’s equivalent of a “public option.” (now this isn’t the place to argue about the issues in financial aid such as student loan debt, etc–it is beside the point for this discussion).

We come up with this formula, thanks to Sen. Schumer’s insight:

So when we look at America’s higher education system, a combination of private and public institutions that arguably is the best in the world (granting it has its own imperfections and needs for reforms), which allow the schools to provide their services in a competitive but mutually beneficial market, and provides students (as consumers) a huge amount of choice, both in program and in cost, it is just plain wrong to say that “government” can’t do anything right and to assume that a public option would destroy competition in the health care market.  The success of higher education contradicts the assumption and renders it null.

We Horned Frogs are justifiably proud of our private Texas Christian University. But if I was a bettin’ man, I wouldn’t place a red-cent on a wager that a University of Texas grad, dead-set against the public plan in health care, would admit that his/her “government education” was inferior in any way, shape or form!

Therefore, applied to the Public Option, the formula becomes: